It was a cold windy day in Vienna, when the four of us, young adults from Germany, Slovenia, Macedonia and Portugal, crossed the main shopping street of the imperial city to arrive at the Impact Hub, a place that gathers a community of people inspired to create and work in social and sustainable business.

There we would find three ladies with whom we spoke about their art project – MAD Coproductions. Lau Lukkarila, Claribel Koss and Vera Rosner received us in their room asking what kind of conversation or interview we would like to have. We prepared some questions, but when they started to tell their story we did not need those anymore.

Vera was the first one showing her passion for dancing to us. You could feel it in every word she was saying. Her eyes were shining all the time and it was easy to understand that as any other artist, in dancing she found a way to express herself. 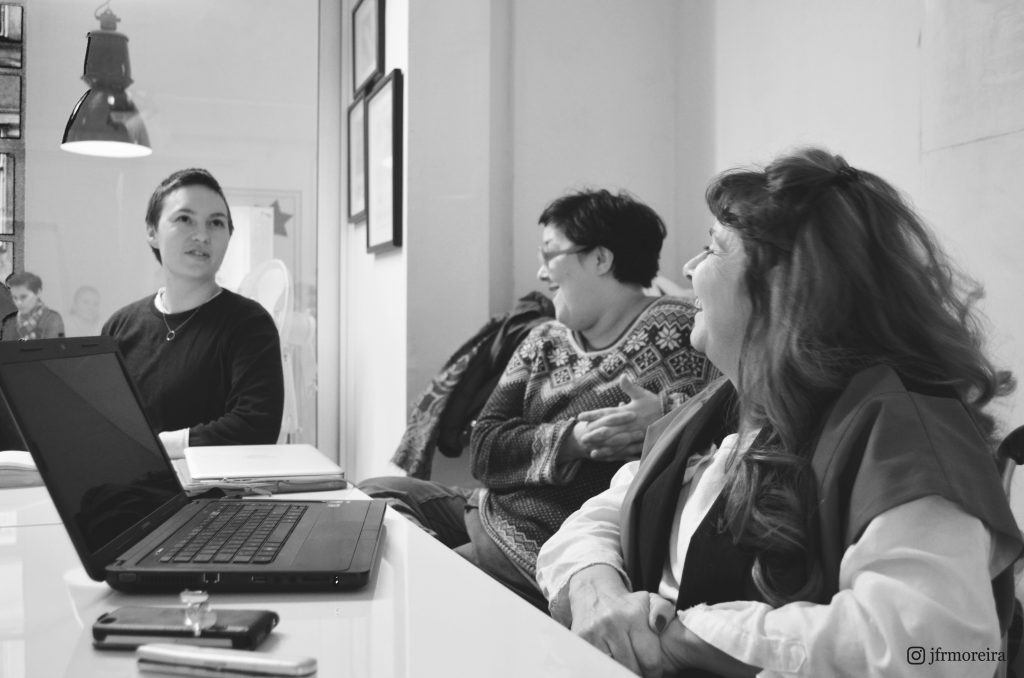 As we were speaking with Vera and listened to her stories, we noticed the kind and warm feelings she had for the people who danced with her. MAD Coproductions gathers people with and without disabilities dancing together, so we asked the three ladies in front of us to describe the relation between the mixed-able performers. Lau got up from her chair and went closer to Vera. As she started to explain the relation between the performers, Lau held Vera’s wheelchair and made some dance moves with her. They began this little dance together, and Vera let emitted smile that spread to all of the people present in the room.

So, Lau added: “You see, it’s like this: I’m not making you dance, but I can dance with you”

And Claribel continued explaining the mindset of all the mixed-able performers:

It was clear by now that art was bringing together the joyful expression of movement to people with different kinds of abilities. The MAD concept was already for us beyond the concept of inclusion. It was much more than that. Yet we had to know if they also viewed MAD as a form of therapy. They told us that they criticized the idea of following a certain manual when helping others. They could not see a person as an object; as something you could help and understand just by reading a manual. They felt the need to understand a person in its core. They stepped aside from questions and actions that don’t bring anything new to a person’s life and actually asked their people what they wanted. To know what a person wants is to have the capacity of helping that person in its desires. As Lau said:

“MAD is breaking the idea of help” 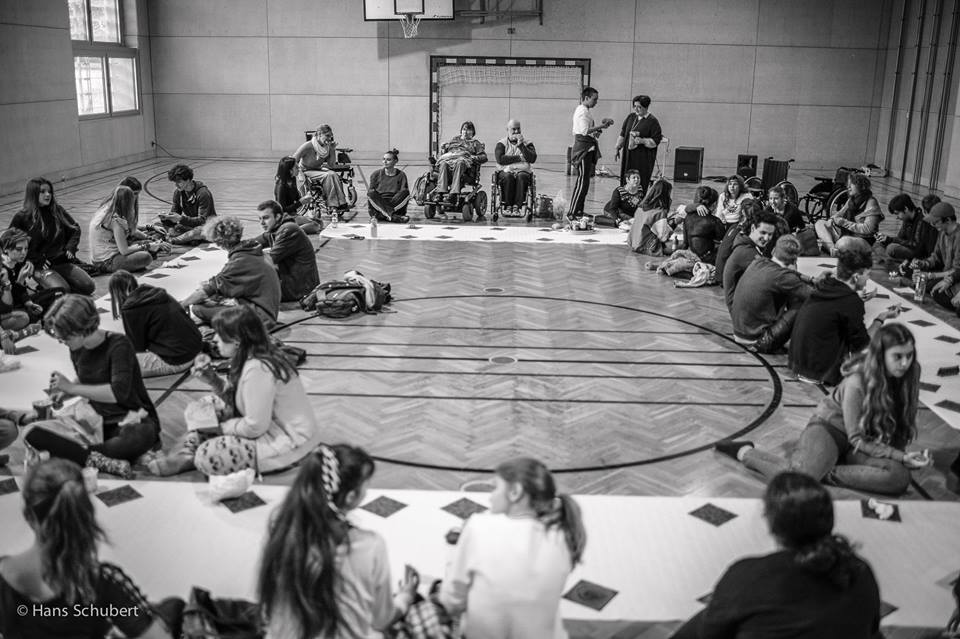 We made a short coffee break that listened to some more stories Vera shared with us. Then, we began talking about the new project that MAD was working on. “Eve+Stéve”, a project named after Steve Paxton, the godfather of contact improvisation, was bringing the ability to one kid to express himself using his body, respecting all of its diversities and possibilities.

A pair of mixed-able artists goes to the school and even though they may have a performance already prepared, they usually try to see and understand the children, knowing what they want. After that, they create a new and unique performance for and with the children. But as “Eve+Stéve” is not just a project of inclusion trough art, the artists end up all day with the children, having the lunchtime as a moment for a true sharing experience of food, feelings, and experiences.

After lunch, it is workshop time. Children work on constructing a wheelchair, which later on they can try to use and see how it feels to be in the position of those needing it to use on a daily basis. Four or six weeks later the artists return to the school for an hour to reflect on the children upon the experience they got. As a reflection work, the children usually give drawings or prepare a performance based on what they’ve learned. 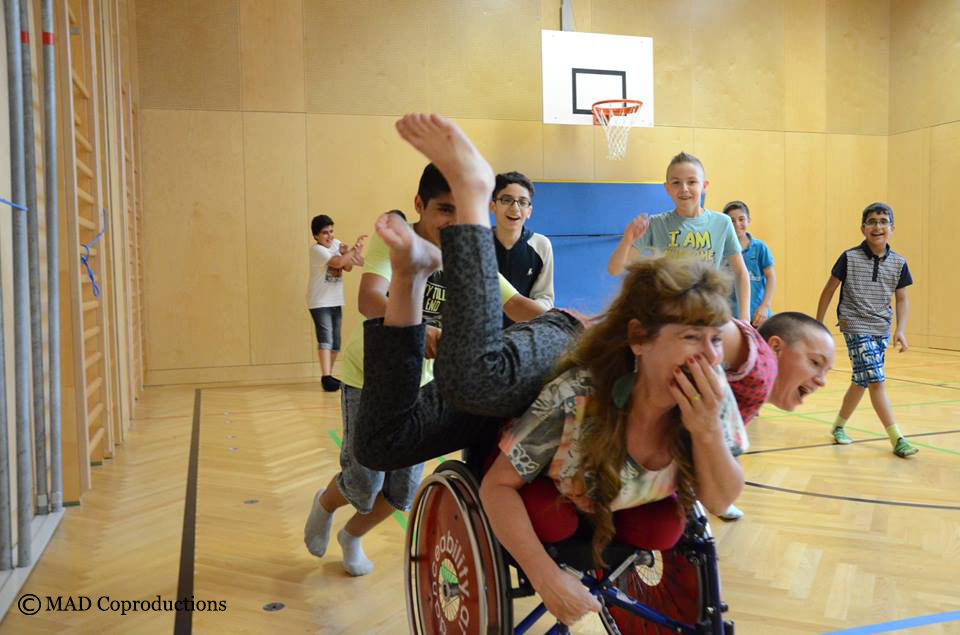 Eve+Stéve has been taking place in the schools of Vienna since this year and has perspectives of growth for the year of 2017 in other regions of Austria as well. If you’re interested in being part of it, you can contact them through email [email protected] or through their website http://www.mad-dance.eu/ .

The fair inclusion of minorities in a community’s tissue is a sign of sustainability and respect. Yet, the MAD Coproductions could never be seen as just a project of inclusion. It’s a project of sharing joy and worlds. As Lau said:

“It’s about art and dancing together”.

If you are in Vienna you can join for a dance with the MAD artists. Each Friday evening they organize a free day for all the interested dancers.

Finally, we couldn’t but ask Vera what she feels while dancing. And her answer was: “It’s like that feeling you have when putting that last piece in a puzzle”.

“Every time I dance I feel perfect”.

*This article is a result of the Youth Exchange “Raise Your V.O.I.C.E. 0.3 ”which focused on raise the voice of marginalized groups across their societies, highlighting the true obstacles they face as the result of the “stigma” put to them by “legitimate society”, or the society living within the margins. The Youth Exchange was hosted by the team of Mladiinfo Austria from 03-08 December 2016, in Vienna, Austria.