Every normal human being considers breathing as the most automated process in the world. We don’t even think about breathing during our days. It happens spontaneously. But breathing is an action which can be controlled and improved voluntarily, and control of your breath means control of your mind, body and feelings as well. This is actually what free-divers do while staying under the water with one single breath to push their limits of freedom. The origins of this discipline date back to the ancient Greece, although the first record of free-diving was recorded at the beginning of the 20th Century and we had to wait until 2002 to have an official definition of the eight disciplines in free-diving with men and women competing in them. Those disciplines are certified by AIDA (International Association for Development of Apnea), the Worldwide Federation for breath-hold diving, that together with the CMAS (World Underwater Federation) are the two world associations in charge for the competitions in this field.

Mladiinfo crew had the pleasure to spoke with Goran Čolak, the Croatian athlete who broke more than 30 domestic CMAS and AIDA records and has won the Croatian free-diving championship in the last 7 years in a row. He is currently the most successful male athlete from AIDA World Championships with 6 Gold medals and one Silver medal. Čolak shared with us his motivation in pushing his limits until breaking a new record and his passion for this discipline that opens a world of sensations and feelings inside his mind and body that cannot be experienced elsewhere. 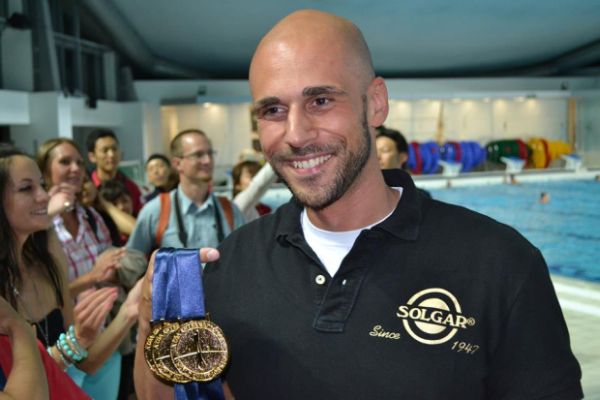 1. Where do your passions for free-diving come from?

Most of free-divers of my generation have a similar story. In 1988 there was this movie The Big Blue made by a French director Luc Besson and it was followed by increased interest in pursuing free-diving. It happen to me as well. From that point on, I started to experiment on my own with free-diving techniques and after a while I decided to become a member of the diving club “Geronimo” of Zagreb, Croatia, where I’m still practicing almost every day and for which I’m competing.

2. How did people in Croatia react to your new world record? Did your life changed?

Certainly not. Unfortunately, in our country the media coverage about this discipline is really poor. Let’s say that generally national and regional media are following and broadcasting news about this sport. However, free-diving is quite a new discipline for them. This means that there is no selection between the information reported. In practice, the number of journalists that you know in person will determinate the number of information and pictures published about you. The latest World diving record that I broke in Belgrade, Serbia on the 21st of November 2013 is one of the most important successes for this discipline in Croatia. It’s the third time that a Croatian athlete is breaking the world record in free-diving recognized by AIDA. That means that this record is recognized by all the free diving organization active all around the globe, not only CMAS that is usually the most popular and followed in Croatia. 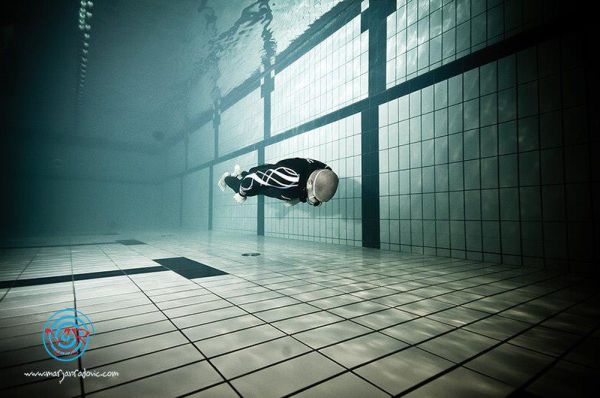 3. What’s behind pushing your personal limits? What’s your motivation to succeed in this discipline?

I guess that my main motivation is the feeling that you have when you emerge to the surface during a competition and you realize that you have won over the entire world and you have broken another record. It is difficult to explain what it is about; it is an intense and short feeling for which is worth to spend years in learning and practicing free-diving. That’s my biggest motivation that still pushes my limits and stretches my boundaries, even after that I reached all the possible competitions and records in this discipline.

4. What kind of training do you do to prepare your body for these extreme conditions?

In the past, free-divers were defined as “human dolphins” able to spend the whole day meditating under the water and it was taught that they have some special characteristics. Of course, the myth of the human dolphin was a hole in the water and therefore free-diving has become a discipline like many others where an athlete can achieve excellent results through a systematic approach to the training that should be done either in the water or out.
A typical training consists of several exercises for the workout of the lungs because every time you exercise and act on breathing properly our bodies become accustomed to channel their inner most oxygen. So the training is based on a series of aerobic and anaerobic exercises, as well as those specific to achieve a higher tolerance to the increase of the partial pressure of CO2 inspired and to the reduction of the partial pressure of inspired O2. 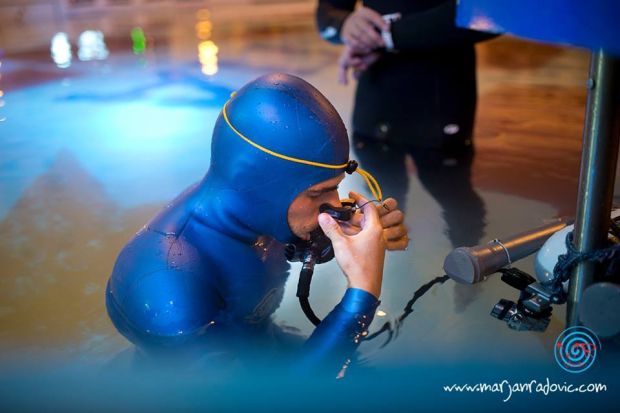 5. Can you explain for those who are not much familiar with free-diving, what happens to the body at depths that record holders like yourself go to?

Free diving is a discipline among the oldest sports in general. It is a form of underwater diving that relies on a diver’s ability to hold his or her breath until resurfacing. Athlets usually attempt to attain great depths, times, or distances on a single breath. It’s very simple and all the world records are published at this website.
Diving into depths puts your whole body through great physiological changes, like the phenomenon of dive reflex and the blood shift that occurs only during very deep dives. These both are physiological responses to diving, provoked by the high pressure of the dive and it’s a defensive mechanism common in all mammals.

6. What comes to your mind when you are diving and holding your breath, like during a competition?

It’s difficult to say. Breathing is the strongest physiological need of a human being and without breathing we feel unpleasant. During a competition and under pressure it is very common to think about quitting. Is not simple to hold your breath until the moment when you almost lose your consciousness and while your body is in strenuous physical condition. The main idea is to keep your mind empty, but often you are thinking about the results, rivals, tactics and techniques used during that particular competition. I guess that it is a common thing for every athlete.

7. What else can we expect from you in the future?

It is difficult to predict the future, who knows. Maybe I will continue this way, or maybe I will never win gold anymore. The general plan for the year 2014 is to be more focused on depth disciplines, since in the pool I don’t feel much challenged anymore. But you never know, we’ll see how things will develop!