Karike (The Links) is a youth magazine in production of a team of young people from Bosnia and Herzegovina and read and focused on young people in particular. It goes in print for six years already, in Bosnian/Croatian/Serbian language, and all the work regarding this youth magazine has grown as a firm example of a good practice for media led by youth. The magazine work so far is all done through volunteering, thus this amazing team behind Karike promotes volunteerism in the same time. As our interviewee for this week on Mladiinfo we have our friend Haris Dedovic, editor-in-chief of this youth magazine. Here we go!

M!: How does the Karike story begins? When was the first number published and what was the main motivation behind, what goals you have set at the very beginning?

Haris: The story of Karike begins with the story of ONAuBiH (Youth Press Association in Bosnia and Herzegovina) and its beginnings. It was the first project of our Association as a direct media product. The first edition was published back in 2007. The motivation and the goals, at the beginning were to have the place where every young person in Bosnia and Herzegovina can address her/his problem, without censorship of any kind and without any journalistic experience. Now, it’s the same goal, but with some additional improvements and upgrades. Today, we want Karike to be that place, but we also want it to be the place where young people that work on the magazine will learn and gain their first experiences on ethical and professional reporting. Also, we improved in content sense. Now we don’t only address the problems, but also provide the relevant information that youth in BiH can’t read in mainstream media.

M!:  Karike is mainly distributed in print. Can it be accessed on-line?

Haris: Karike can be found online, but in the form of PDF magazine at this webpage. Also, articles from Karike are being published on many news portals in the country. We are starting regional cooperation with online media at the moment, too. But, yes, that is the truth, Karike are periodical magazine which has its rules of reporting, analysis, editing and will not go online, except maybe in some extreme circumstances. 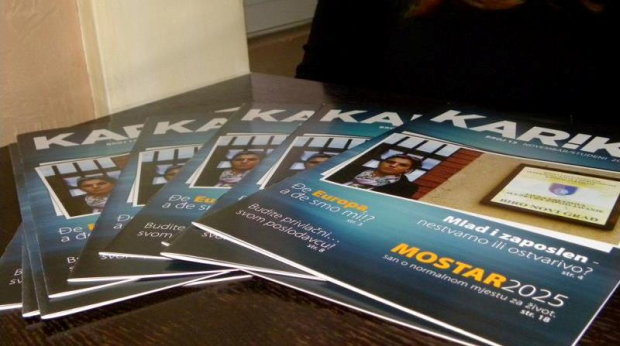 M!: Can we see Karike as a magazine that amplifies the voice of youth, especially when it comes to share of opinions by youth concerning politics; and is there also the space for other contents that could be read?

Haris: Karike are youth magazine and are really strict on that definition. That means that Karike are reporting on all the topics that concern young people. So, yes there is a significant amount of political articles, but there is also other topics that are important, relevant and interesting for the youth in BiH – NGO activities, self-employment, economy, health, environment, etc. The main goal of our magazine is to provide articles on topics that cannot be found in the media that we can read every day and are relevant for youth. And if that means politics – we report. If that means environment – we report. If that means space program – we report. It’s not a political magazine, it’s youth magazine.

M!: Can you make a comparison with other good media practices that you find similar with Karike and are based in other countries?

Haris: Hardly. There are, of course, a lot of good platforms for young people where they get information on good and relevant topics, Mladiinfo is one of examples, but I would say that Karike are different in the sense of style. Because we learn/ed from magazines such as Feral Tribune (HR), Slobodna Bosna (BiH), Buka (BiH), but in the terms of topics and social changes within the youth, we are mostly progressive. We try to be the mix of good “old school” style and “new age” movements that youth is always striving to.

M!: Haris, apart from your activities with Karike you are also in the board of European Youth Press, a highly-valued organization in Europe when it comes to promotion of the role of youth media and the freedom of press at the continent. How is the experience for you to be part of this international organization?

Haris: Well, for me, that’s just another level up. I have been working in this field on a national level and now I am working on European level, and sometimes global. For me personally, that means new experiences in the field of work, a lot of new friends and colleagues and new skills. From a journalistic point of view, that is so helpful in the means of intercultural dialogue, which I think it’s really important for a journalist and it contributes to ones objectivity a lot, because it expands horizons. In my opinion that’s one of the main things one journalist should improve. 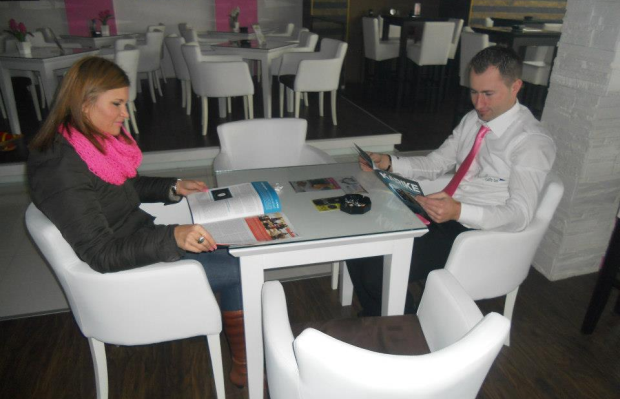 M!: Just now in February you were guest-speaker at the E-society conference in Skopje and at one point you stated “Every time you print a newspaper, you kill a tree. It’s better be worth it!” Do you have anything else to add when it comes to quality media content?

Haris: Yes I did. And I still think that. Because, if you think about the environmental problems that we have globally, you have a “big burden of the quality”, because it would be irresponsible to print just anything. I love internet. Internet is great, but as everything in life and in the world it has its good and bad side. Bad side of the internet is that it’s seriously tackling the quality, professionalism and style. Users of the internet want it to be quick, as brief as possible and maybe sometimes sensationalistic. We are the opposite of that and will try to keep it that way.

M!: Recently, there have been massive social protests in Bosnia and Herzegovina where the citizens expressed their dissatisfaction with the political elites ruling the country. As a young media maker, what is your opinion on the recent developments? What would the youth media role be in regard to the informing and analyses of the current situation?

Haris: Thanks God, citizens finally decided to make serious changes! As a young journalist, media worker and citizen I think this is great and it was time for that a while ago, but better late than never. It developed in a violent way and that is not a really good way, but the Personal Identification Number (JMBG) protests showed that in countries where political elites rule like they rule in BiH, it was impossible to change anything without “showing some sharp teeth”. Now citizens showed that they have the power and now they are back to peaceful protests with really practical requests. I think that was the best way. Youth media role is to correct, counteract and oppose politically corrupt media and there is a lot of those in BiH. Youth media role is to say “the media supported by the ruling political elites are making propaganda that these protests are anything else than desperate citizens with corrupt, chauvinistic, incompetent and unprofessional government that we have since 1991”.

Open call: Reporting on Gender-Based Violence in the Balkans

Rondine Cittadella della Pace – Scholarship for Students from the Balkans