Agele Moses Taban is an amusing young man that easily makes friendships thanks to his open approach and wide smile. The 26-year old youngster comes from Juba, which doubles as the capital of South Sudan and the South Sudanese state Central Equatoria, but currently lives and studies Business Management at Comenius University in Bratislava, Slovakia. Wanting to learn more about the youth movements and with time to become an active change-maker in the society, Moses joins the team of Mladiinfo Slovensko. Trying to avoid everyday discussion about the conflict in the African region he comes from, we used the hours in Mladiinfo’s office to talk with Moses about things that connect two, at the first side different, cultures: the Slovak and the culture of South Sudan, as well as the youth situation in both countries.

Mladiinfo Slovakia: Moses, perhaps many people have asked you several times why you chose to study in Slovakia, so we will be curious too. What is the main reason for you to come here?

Moses: Of all the questions I get on a daily basis, this is one of the most frequently asked. Why not Slovakia? It looks unreal but Slovakia actually chose me. Until 2011, I knew little about this Central-European country. But in early 2012 when I was weighing my options for college education in Europe, Slovakia appeared on my list as first choice topping Great Britain, Germany, Norway and Sweden. It’s maybe because of the affordable education, lifestyle, and low cost of living and of course, and the beautiful scenery like the Tatra Mountains that Slovakia offers. I am a nature guy and Slovakia seemed a potential place for me to enjoy nature. Also being at the heart of Europe, I knew that choosing Slovakia meant easy access to the other parts of Europe. So it would be easier to fulfill my dream of visiting at least 150 countries of the world :). 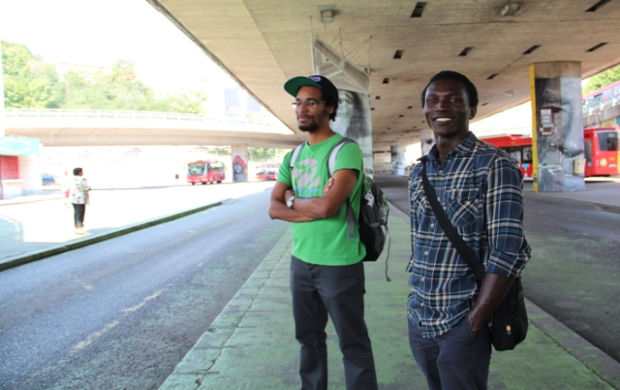 Snap shot from the Mladiinfo Slovensko YE Green Your Life, photography is from private archive

Mladiinfo Slovakia: Try to think about your first impressions when you arrived to Slovakia? What came to your mind?

Moses: The first thing that came to my mind was the weather. My flight from Cairo, Egypt (hot place) to Vienna, Austria and later Bratislava (cold) by bus took only four hours. Meaning there was sudden and abrupt change in the weather. Seeing 25C -42C in my city, temperatures like 12C-15C freaked me out. It was something totally new for me. And to make it even more interesting, I did not know the expression “dress warm” when a friend recommended that to me. I had mostly light t-shirts. It meant I had to change wardrobe on my first day in Slovakia. Another thing was the language. Until Slovakia, I thought I would face no difficulty in communication with my English skills. Little did I know that I was in for the shock of my life: Slovak language. Due to this problem, I ate only rice and chicken for almost three months since it was the only food on the menu I could at least read and understand in Slovak. Besides, I did not want to waste a lot of time trying to understand the different menus when I am hungry :).

Asking a girl for a coffee means asking a her out?!

Mladiinfo Slovakia: Talking about cultures, what do you consider as main differences between the culture of Slovaks and of South Sudanese people? Has something happened while you are in Slovakia when you said to yourself: “This will never happen in my country”?

Moses: One thing I found interesting between our cultures in South Sudan and Slovak culture is the respect for elders. I notice it while in the bus or trams in Bratislava, that the younger ones tend to leave a seat for the elderly. The same happens in our cities in South Sudan. It makes me feel, we have something common. However, I find it unbelievable to see a smoking lady. It  is not a common practice in my home-country. Also night life and drinking is one crossroad where our cultures meet. South Sudanese youth drink until they drink-out. (Un)fortunately, I am a „bad“ representative in this area. I get drunk with a glass of beer. However, although it is normal to ask a girl for coffee without her giving a thought, I find that it is the other way round with Slovaks. On many occasions, I have tried to ask some of my female friends for coffee, but they have turned me down. When it happened more than twice, I carried out an investigation and discovered some astonishing facts: Of all the responses I get, most of them are completely far from the obvious answers YES or No. For instance, recently, I got the “I have a boyfriend’ response more than three times. Later on I concluded that in Slovak culture it might imply that asking a girl out for a coffee means asking her out. That is kind of really interesting for me. 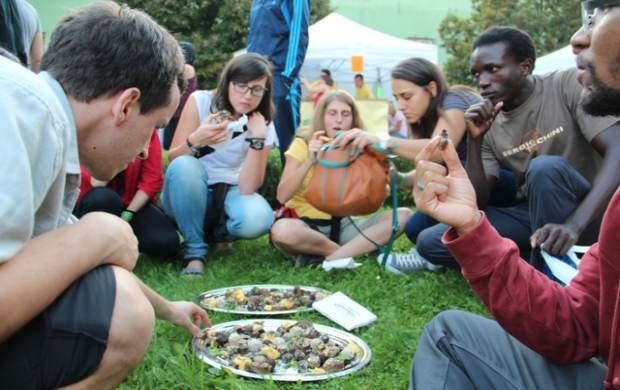 Mladiinfo Slovakia: Being a student in Slovakia and able to compare the two educational systems, what would you notice as most important pitfalls in the education in South Sudan, but also in Slovakia?

Moses: I have never studied inside South Sudan for long enough to understand the education system. Due to the war in my country, my family and I ran to neighbouring Uganda where I completed both elementary and high schools. However, based on my observation and talking with my friends who study inside South Sudan, the major pitfall in our educational system is lack of definite educational structure. South Sudan has 10 states (regions). Some of these states have adopted different syllabus. For example, I know some regions that teach Ugandan syllabus while others find Kenyan Syllabus comfortable. Yet to other states, syllabuses taught by North Sudan are easy to integrate in South Sudanese schools. All these variances present a major problem for both teachers and students who left wondering if the syllabuses they are getting are superior or at least same to the others. Another pitfall in south Sudanese education system is the lack of well-established learning infrastructures. An example is our number one university in the country –University of Juba. During the transition of the university when the country split from Sudan,  many students who were enrolled at the time had their studies interrupted. These interruptions resulted in difficulties with running the university the following year as new students were enrolled.

About Slovakia, I have no comment as in comparison. Slovak educational system is near to perfect in my opinion. I attribute this to the structure. In a Slovak school, one knows what he has to do to pass. However, I find the teacher-student relationship cold. I notice that, in a Slovak class, it is rare for students to speak freely or interact with the teachers. It is like police-mafia relationship. So this makes the class sometimes boring for me. I am actually kind of getting used to being timid in class these days. This is one pitfall I see in Slovak education system.

An idea about Mladiinfo office in South Sudan

Mladiinfo Slovakia: Already two months you are an active volunteer at the office of Mladiinfo Slovakia in Bratislava. Through the daily work with youth in Slovakia, could you make a comparison between the youth activism and youth attitude in South Sudan and Slovakia?

Moses: My two months at Mladiinfo are exciting. I have been to one workshop and two events. I am learning so much and discovering so much. I am blessed to work in a vibrant team of other volunteers with vast experience in networking. Youth in Slovakia are more involved, open-minded and have positive attitude towards youth activities and civil society causes compared to their counterparts in South Sudan. I attribute this to ease access of information. Slovak youth have ease access to information about projects, events, rights among other information.

Due to poor lack of better communication devices and channels like the internet, South Sudanese students lag behind. That is why I am volunteering with Mladiinfo, the backbone of information. I hope to learn diverse information dissemination techniques and open Mladiinfo South Sudan, where youth can get access to information that can help them develop themselves. I believe that information is power to change. And South Sudanese youths need this power to discover what change they are capable of bringing to themselves, their friends and our beloved country South Sudan. 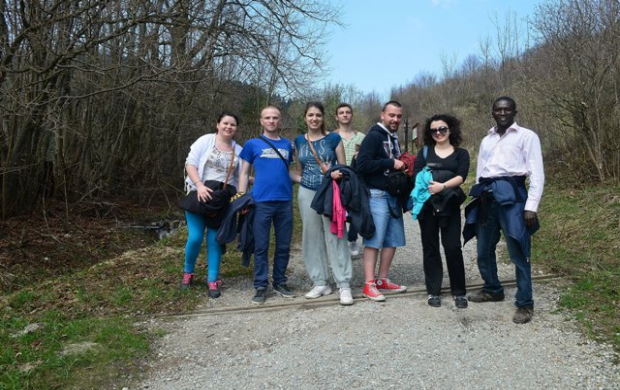 Mladiinfo Slovakia: Being a good student and an active young person, what are your ideas for your future career and life? Where you see yourself?

Moses: I see myself as PhD holder in the next half decade, pursuing my passion for teaching and motivating young people to believe in their potential and their power to change the way how things are run today. I would like to own my business entity, run a youth organisation and culminate my dreams by becoming the voice of my people; go into politics and shake the political environment in my country. Meanwhile in my personal life, I would like to achieve my dream to travel more than half of the world before I am 60 years old; get married, build my own family, write books and do crazy things that I would never dare do in normal mind. Things like bungee jumping, parachuting…

Mladiinfo Slovakia: Why would you like to become a politician at first place? It is interesting to hear the answer.

Moses: Once I had the chance to meet and present a song to the current Ugandan president. I was younger and in elementary school at the time. Later I got elected to head of South Sudanese students union in Westnile, Uganda while in high school. After speaking in one important gathering as the guest of honor, I knew that I had the skill to lead people to their dreams. I want to lead my people to their dreams one day.

Mladiinfo Slovakia: And why would you recommend young people to visit Slovakia? To what extent do you agree with the myth that Slovak girls are among the prettiest in Europe :)?

Moses: I am in Slovakia for more than two years already. While being here, I had the opportunity to visit  Austria and The Czech Republic. My experience have shown that  Slovakia is an ideal choice for young people. The Slovak capital, Bratislava, has a lot of surprises to offer to visitors. From its night clubs to the cinemas and the rich history, tourist are left with open mouth. As young people who intend to study in Slovakia, I highly recommend the country. The costs of living are relatively lower than any other EU-member country I know. Moreover, Slovak people are friendly and kind. They always wear smiling faces so that you won‘t miss your home country. Many times when I have gone on a trip, I have used the saying „ I am going home“ meaning I am returning to Bratislava. It is a feeling of Slovakia as a second home.

And about the Slovak girls: it is not myth that they are the prettiest in Europe. From their fine texture, to charming eyes and betraying smiles, there is no wonder that they top the list in Europe. Everyday I walk out the house, I see beautiful girls on the street.

One thought on “When Slovakia Becomes Your Second Home”