The enthusiastic 19-year old Stanislav Slavev from Bulgaria is part of a team who have created a revolutionary device. BLITAB is the name of their product, a special tablet computer that will help blind and visually impaired people worldwide to benefit from the newest technologies be part of the modern social community. Driven by his idea for social innovation, Stanislav recently moved to Vienna to actively join the BLITAB team and to start his Bachelor studies in Business Informatics. Mladiinfo International had the opportunity to meet Stanislav at the Social Impact Award Community Meeting that took place in Bratislava last month and recently spoke with this young entrepreneur who firmly believes that “the attitude is the key to the doors of achievement”.

M! International: BLITAB certainly is an innovation more than needed nowadays, but always the question is how did you come up with this kind of idea, how did you get inspired? Who is behind the BLITAB project and what is your role in it?

Stanislav: The idea came three years ago when a blind colleague of our team member Kristina Tsvetanova failed to sign himself in an online university course. This was the trigger how we started developing a device involving Blind people in the social community we live today. From the beginning we were convinced in the importance of the project and that is why we are 100% dedicated to it. With more than 150+ successful design projects worldwide, I am mainly responsible for the design concepts and prototyping process in BLITAB Technology. I had to adapt our perceptions in order to get a design which is user friendly and accessible for our visually impaired users. On the other hand, Kristina as experienced engineer and supply chain expert on international projects and companies is responsible for the executive management and strategic company development of BLITAB Technology. And Slavi Slavev, with more than six years of experience in the Internet of Things, is responsible for software development, IT-Innovations and know-how, as well as for the scalability of web-applications in BLITAB Technology.

The team behind the BLITAB Project: Stanislav, Kristina and Slavi

M! International: Could you share with us how does this device work? What are the main differences with the others Braille devices?

Stanislav: In general, Braille notetakers that are already developed represent a classic type of assistive product: with only one line Braille text, mechanical elements, they are often developed and designed in isolation from users. They are just like keyboards, so what you see, is what you get. In addition, it is very difficult for a blind person to make a buying decision, because Braille notetakers’ price ranges from €4,000 to more than €10,000. BLITAB is a next curve Braille device for reading and writing that displays one whole page Braille text, without mechanical elements. It is like an e-book which instead of using a screen displays small physical bubbles. They rise and fall on demand, composing a whole page in Braille code. Our innovative technology based on smart liquid materials has not been used until now in this market niche. Together with a leading Nordic R&D lab we are going to implement it in BLITAB. And this is the reason why we are already in patent procedure.

M! International: Recently you have launched a fundraising campaign in Indiegogo. Why did you decide to use crowd-funding as a source of raising finances?

Stanislav: We are an example of a hybrid start-up social venture that combines the social logic of a non-profit with the commercial logic of a for-profit business. When social entrepreneurs like us are working, they can be fantastically creative and make a positive difference to the whole world and especially to the blind and visually impaired. Due to the fact that now we are in prototyping phase we are intensively looking for financial support in form of social programs and crowd-funding. We are glad to be approached directly by INDIEGOGO Team in the USA, and be already online. We would like to motivate all people to do something special for other people and be part of the social impact we produce. 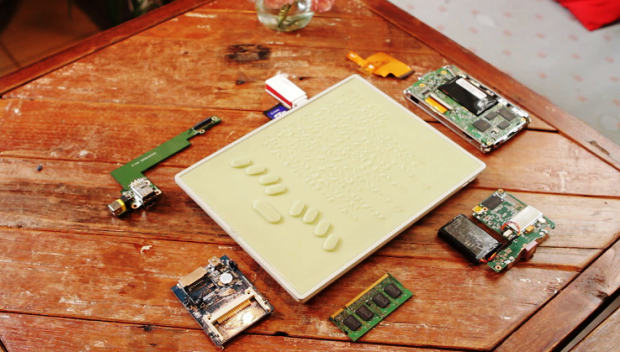 M! International: When do you expect to present the first prototype of BLITAB?

Stanislav: After successful co-financing, the first prototype of BLITAB can be expected within three months. Awesome, isn’t it? Although all this process requires additional work and long sleepless nights, as in every start-up. But seeing the smile of our blind friends is enough of motivation to further develop BLITAB.

M! International: Finally, as an experienced young entrepreneur, what would you advice to the young people who are now starting their own business?

Stanislav: Do not hesitate to start your own start-up! Just do it at the right time, be prepared with financial support, contacts and people that believe in your ideas. Be patient and active and do not stop when you fall, just stand, take breath and start again!