Culinary traditions are an integral part of European culture. Each country, each region even of the European Union has its own, characteristic recipes. Where would Europe be without its Italian pasta, Belgian or German beer, Danish rye bread, Hungarian goulash, Spanish tortillas, Austrian strudel, Czech Slivovitz liqueur or French Cancoillotte cheese? The list is endless but conjures up an image of the Union European where diversity is not an obstacle but is, on the contrary, a creative patchwork and an invitation to discover other cultures. 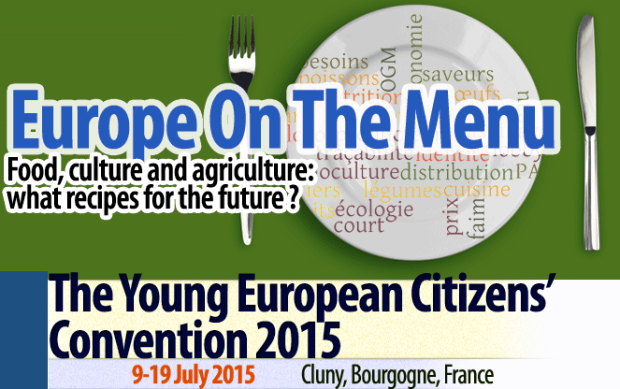 In parallel, there are major political issues at stake around food which constitute some of the most important issues of this century. The Common Agricultural Policy is one of the oldest European policies. It is currently faced with environmental requirements which could be advantageous or disadvantageous to the agricultural economy. The competition between agro fuels and food crops is an example of the complexity of these issues. In addition, contemporary rural development is an issue for society in terms of European territories whose landscapes have been shaped by centuries of breeding and crop farming. European Union, moreover, is a major world food producer. Agriculture plays a crucial role in a world where agricultural production, which is under threat from climate change, must feed more than 9 million human beings in 2050.

In Cluny (France) from the 9-19th July 2015, the Young European Citizens’ Convention will reflect on food in the European Union. The official title of the event is “Europe on the menu: Food, Culture and Agriculture – what recipies for the future?” and it will encompass 50 participants that will have 10 days to come up with cultural and political proposals around this theme. Read the detailed programme HERE.

Note that since 2001, 800 young people from around 50 countries have participated in the Young European Citizens Convention.

The selected candidates must confirm their participation by transferring the sum of:

This amount includes accommodation and meals. Travel costs are not included in the fees.

Register and download your application where you should include:

Apart from languages skills, no other academic or professional qualifications are required. The organizers explicitly encourage participants from various fields to apply. Deadline for application is extended until 31 May, 2015 and the selected candidates will be informed by email before 10 June 2015.

2 thoughts on “Europe on the Menu: Summer School on Food, Culture and Agriculture”