Born in Germany to Slovenian partners, Lidija Globokar grew up bilingually and “biculturally”. She guesses that this has influenced her choices of studies as she is BA in Languages and Business and MA in Communication and European Affairs. During her Bachelor’s she takes the opportunity to spend two years abroad in France and Ireland, and she conducts her Master’s degree afterwards in Brussels, Belgium. She has a strong interest in learning new languages, getting to know people from different countries, and as well she considers herself a true “Europhile” embracing the European spirit that together we are stronger. Mladiinfo International has met with Lidija Globokar in Skopje, Macedonia as she was guest to one our event. Today we deliver to you our interview with her where she reflects on her professional development and her work and engagement with Project 668, a professional development platform for current and former European Union trainees.

M! International: In 2012, you have applied for a traineeship at the European Commission and this was an important point in your career developments. What was the initial motivation to conduct this journey?

Lidija: After my year of study in Ireland, I completed an internship at the office of a Slovenian MEP in Brussels. This internship triggered my deep wish to work one day in the area of EU affairs. Before that it has been clear to me that I want to work in communications and after that the component “EU Affairs” was added to my job wish list. Therefore, I decided to do the Executive Master’s in Communications and European Affairs at IHECS in Brussels which perfectly combined both fields and was very project-oriented. As the Master’s included an internship, it was clear to me that I want to complete it in an EU institution. As I have had the opportunity to look behind the scenes of the European Parliament already I wanted to have a closer look at the “guardian of the Treaties”, as the European Commission is called.

Already at the end of my traineeship I started applying for different jobs and internships in Brussels. As expected this was a tough task to complete. I had to admit to myself that I might not find anything in Brussels and also started to look for jobs in Germany. By the end of my traineeship I had an internship offer in Brussels and a job offer in Frankfurt, I chose the latter because I didn’t want to be “the intern” anymore and was looking for a bit more stability and security. 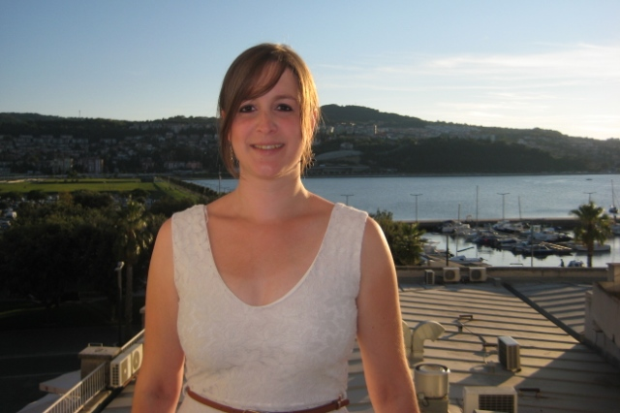 M! International: Whilst on your traineeship in the EU Commission you and your colleagues have launched the Project 668, therefore what are its goals and activities? What has inspired you to create this initiative?

Lidija: Project 668 was founded by a group of European Commission (EC) trainees, true. We started it during our traineeship in April 2012 and our motivation was our concern about the high rate of youth unemployment in Europe and the large number of people that we met during our traineeship who told us that they could not go back to their country because there were no jobs. All of them were very well educated, spoke at least 3 languages, had several Master’s degrees and had done traineeships. We therefore wanted to contribute to the fight against youth unemployment and founded Project 668 (Facebook page). We created a database of EC trainees and approached companies, organisations and all sorts of consultancies with this database. After we expanded our target group to all EU trainees we focused on our social media channels because it was too difficult to handle the database for such a large amount of people.

We consider Project 668 to be a professional development platform for current and former European Union (EU) trainees. Its aim is to help other trainees break into the job market, develop their professional skill set and manage their careers. There is a gap between EU trainees and the “Euro-bubble job market” and Project 668 strives to close this gap. We do this mostly online by sharing vacancies and quality content on all the different aspects of professional development and job hunting.

M! International: Can you share with us also successful stories of people who broke the gap between them and the “Euro-bubble job market” thanks to Project668?

Lidija: We have examples of both employers and trainees who found their “counterpart” if you want to call it like that. Unfortunately, we have no real numbers to show how many people found a job/an employee thanks to Project 668. However, I can name two concrete examples. Once, a company that was looking for a specific language profile, which was apparently difficult to find, approached us. At that time we still had the database and scanned it for this specific profile. We found some suitable candidates and one of them got the job. Another example is that we posted a vacancy of one of our partners and finally a “Project 668er” got the job.  Both jobs were based in Brussels. 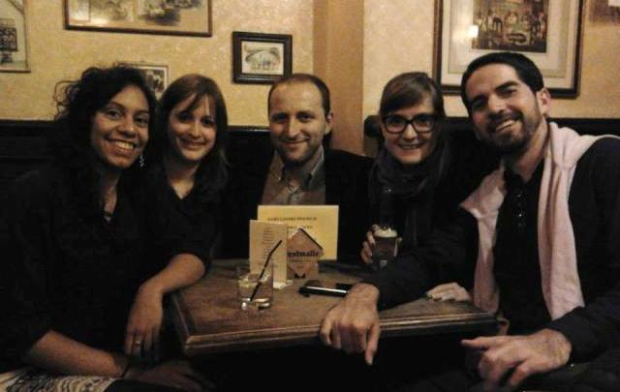 Mladiinfo International: This July you co-organized an amusing event – European Interns’ Day in Brussels and sent out a message for better interns’ condition. What are the results of this effort?

Lidija: The purpose of the European Interns’ Day (EID) was to raise awareness about interns’ precarious conditions in Europe, to call for new solutions to boost youth employment through internships with fair remuneration and quality training, and to launch and promote the first European Label for Quality Internships developed by InternsGoPro and NGO partners.

As a result we got support from Members of the European Parliament and European Commissioners who underlined the need to support interns’ rights and conditions. It also created a lot of buzz online. I believe that it is important that people are aware of the unfair and slave-like conditions of interns and the EID did exactly this. It created awareness.

At Project 668, we only post and promote internships/job offers which offer a decent salary which allows you to live independently in Brussels (without support from your parents etc.). In our opinion it is important that interns start saying: “no to unpaid internships and unfair working conditions”. Otherwise they enter into a vicious circle of unpaid internships. I know that this is quite an ambitious goal but if we do not change the mindset of the people, we won’t reach a fair and human working environment for interns.

M! International: In the recent period you earned several achievements – won a challenge “Europe Needs you for 4 JOB-Creation” and also won national round of European Charlemagne Youth Prize. How did you greet these news?

Lidija: I still remember the moment when I got the e-mail that we were the national winner of the European Charlemagne Youth Prize. It was in March this year and I was on holidays in New York. When I checked my e-mails and read the one from the Representation of the European Parliament in Slovenia I could not believe it! I was so happy and running around the room, hugging my friend and wanted to call the whole team and share the good news with them. Well, unfortunately there was this mean time difference so everyone whom I tried to call was sleeping…so I send an e-mail to everyone.

Only a few weeks later another piece of great news reached me. I was at work and checked challenge:future’s Facebook page because I knew that that day the results of the “Europe needs you 4 JOB creation” challenge were to be published. I was so happy that I found my name among the winners and again couldn’t believe that we actually won the challenge!!! I ran to a colleague, hugged her and asked her to pinch me.

It is simply a great feeling when you see that the work, effort, energy, commitment and motivation of your team get rewarded. And it is not only the fact that you have won a prize, but also the opportunity to develop your project further during a workshop as it was case with the collaboration challenge among Mladiinfo and Challenge:Future. To talk to people who work in the NGO sector and have years of experience and discuss possible ways of development which are actually realistic was a very helpful and valuable experience. 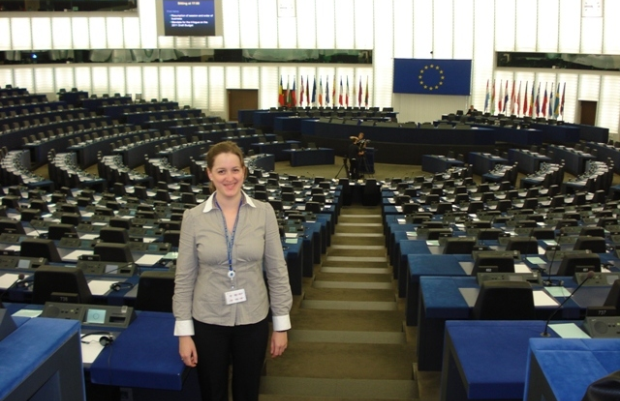 Lidija as intern in the European Parliament

M! International: To sum up, what would you refer to interested trainees in EU institution or young people who already completed their traineeship?

Lidija: If you want to do one of the official traineeships of the EU institutions you should try to apply several times and prepare your application carefully. This also means that you have to dedicate some time to that. It also helps to ask your friends to read through your motivation letter or get in touch with someone who has done the traineeship already. However, if you don’t get pre-selected, it is not the end of the world. You can apply again or you look for other traineeship opportunities in the area of EU Affairs. The different EU agencies are an option as well. There is one in almost all Member States of the EU.

If you are one of the lucky ones who have been selected for one of the official traineeships you should start to build a network in and outside the institution(s). Establish relationships with people who work in the field where you wish to work and approach them topic-related and not job-related. It is also about quality and not quantity which means that it is better to have few good contacts instead of many superficial contacts. I also prefer to say “build relationships” instead of “build a network”. And keep in mind that you can also connect via sports etc. and not only via work. On our different communication channels like our facebook page and blog we also share articles and information about how to build a network and find a job. In any way I wish you best of luck and all the best!

3 thoughts on “Lidija Globokar: Interns to Say “No” to Unfair Working Conditions”