“The idea was to really do something that we want and that will be our idea, and which other young people recognize and support as an initiative.”

As participants of youth exchange project “Raise your V.O.I.C.E” organized by Mladiinfo International in May 2014, our task was to visit the „Center for intercultural dialogue” in the city of Kumanovo and to find out about their work. We had the opportunity to talk with Ivana Davidovska, part of the team of CID. Ivana gave us great insight not only into organization, their work, good and bad experiences, but also insight into the whole situations of the ethnicities across Kumanovo and beyond in Macedonia. She works as an office manager and has been with CID since its very beginnings.

Center for intercultural dialogue as a promoter of tolerance and development

The Center for Intercultural Dialogue is a civic association gathered around the idea of supporting tolerance between different ethnicities, religions and cultures, the promotion of non-formal education and providing opportunities for intellectual and personal development.

This center was established in 2006 by young people from different ethnical backgrounds who had already been participants of other NGOs with the idea to develop their own organization. As expected, it was not easy in the beginning.

„During the first year and a half we didn’t even have an office. Our homes were the offices. We would meet in cafes or bars or wherever we could,“ shares Ivana.

It is lively in the Center for intercultural dialogue

Despite the problems, they were persistent in their intentions to make a difference with regards to ethnic segregation in Kumanovo and Macedonia. Their persistence paid off when they established their first office in 2007, which enabled them to focus more on their work. During the first two years they were operating locally, gradually expanding their work to both national and international level, at which they integrated themselves into three networks: Service Civil International  (SCI), Youth for Exchange and Understanding (YEU), and UNITED against racism.

CID’s program has been oriented on few things. Firstly, this NGO is concentrated on providing volunteering opportunities through which young people are encouraged to volunteer both in the country and abroad. Every year around 100 young people are sent abroad through such program. Thus the priority of the organization is active youth participation and activism, to provide the opportunity for young people to take part in decision making process for their importance, whether on school, municipal level or even higher level. The crucial idea is to encourage young people and give them a chance to make a difference.

Another relevant aspect of CID’s activity is promotion of intercultural dialogue, not just in Kumanovo which has a significant Albanian, Serbian and Roma population, but also on a national level.

„We worked very hard on bringing together not just local communities with different ethnic backgrounds, but also to promote this idea on a national level too. Differences, even on a local level, are not promoted as ethnic differences, but rather as personal differences. The motto is that every person is different and every person is a culture for himself or herself. And if we can learn to live together and respect our differences on a personal basis, then we will be able to get over ethnic and cultural differences more easily,“ states Ivana. 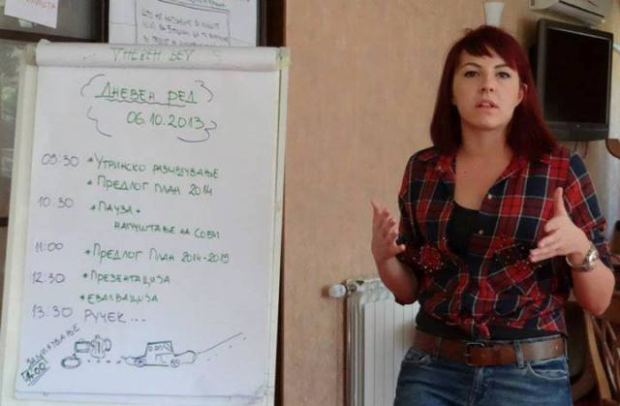 Ivana from the Center for Intercultral Dialogue

In 2010 CID has taken a big step forward by establishing the youth center “Multi Култи“ which we also visited during our time in Kumanovo. We were greeted by a dozen of friendly volunteers from different European countries who were preparing for a theatre performance.  “Multi Култи“ was built with the purpose of being an ethnically neutral place where all the youth could participate without fear of being discriminated on any base. Daily workshops and activities are organized on different subjects and young people are always welcome to spend their time there. Methodology of the work is based on the idea that all workshops and projects are bi- or multilingual. So instead of trying to „integrate“ Albanian or Roma people into Macedonian society, CID’s goal is simply to bring people together.

And this is where CID and similar civic associations step on the scene. Tired of authorities’ reluctance to make a progress in this regard, they took over the task themselves; through non-formal associations and NGOs they try to work actively on intercultural dialogue, equally representing all sides.

One thought on “They deCIDed to be the change!”